Montford is typically alive with activity. Take a stroll down Montford Avenue and on a sunny day, you’ll see residents walking or cycling through the neighborhood or stopping at a Montford restaurant or enjoying time in Montford Park.

For tourists or newcomers, a visit to Montford will stir up thoughts of life in a beautiful setting where well-maintained Victorian houses mix easily with architectural styles from the late 19th and early 20th Centuries.

While historically, there were a number of architects associated with Western NC, two stand out as having left an indelible imprint on Asheville. Both William Henry Lord and Richard Sharp Smith played notable roles in the region in the early 1900s.

In 1899, at the encouragement of Smith, Lord moved to Asheville, where he emerged as one of the most important architects in the city. In 1900, he completed a family home on Flint Street in the Montford neighborhood.

Throughout the early 1900s, he was actively involved in the growth of the city, where he completed a number of notable commercial, institutional and residential buildings. Lord’s early work in Asheville’s Montford neighborhood consisted mostly of homes where he incorporated Colonial Revival and Shingle styles.

In addition to his own home, other Montford houses include the Millender House at 240 Pearson Drive, the Powell House at 346 Montford Ave, and the Westall House at 4 Clayton St. Lord’s architectural legacy formed a solid framework for Asheville’s distinctive architectural character.

Richard Sharp Smith, supervising architect for George Vanderbilt’s palatial Biltmore House, left his mark throughout Asheville neighborhoods, and his impact on Montford architecture is obvious. Rather than working with a specific style, Smith generally used motifs drawn from a variety of styles.

Among his favorites were gambrel roofs, hipped gables, heavy porch brackets, bay windows, steeply pitched roofs and simple Colonial Revival detail. Though only 45 houses in Montford are documented as his, on stylistic grounds, numerous others can easily be attributed to him.

However, Smith and Lord were not alone, as other architects of the time played a role in influencing this beautiful district. Some of the more complex designs combined to create artistic architectural styles reminiscent of such luminaries as Frank Lloyd Wright and Bernard Maybeck. Historic Montford is a perfect example of a location where preservation creates atmosphere.

If you choose to wander through Montford, you’ll find a blend of architectural styles that include Arts and Crafts, Colonial Revival, Neoclassical, Queen Anne and others. You could call some of the homes a fusion of more than one style, making the architecture in this neighborhood distinctive and lively in many ways.

The uniqueness and diversity of Montford dates back to its origins amidst one of Asheville’s energetic growth spurts in the early 20th Century. Developing as primarily a residential neighborhood, Montford was incorporated in 1893, and annexed by the city of Asheville in 1905.

The majority of the buildings in Montford—mostly single family homes—were constructed between 1890 and 1920. This contributed to its designation in 1977 as an Historic District and listed in the National Register of Historic Places. Then, in 1981, the Asheville City Council designated it as the Montford Historic District.

There are several restaurants in Montford, including Tod’s Tasties, at 102 Montford, just across the Montford Bridge from downtown. Tod’s serves breakfast, lunch and dinner all day long in a quaint, casual cafe setting. 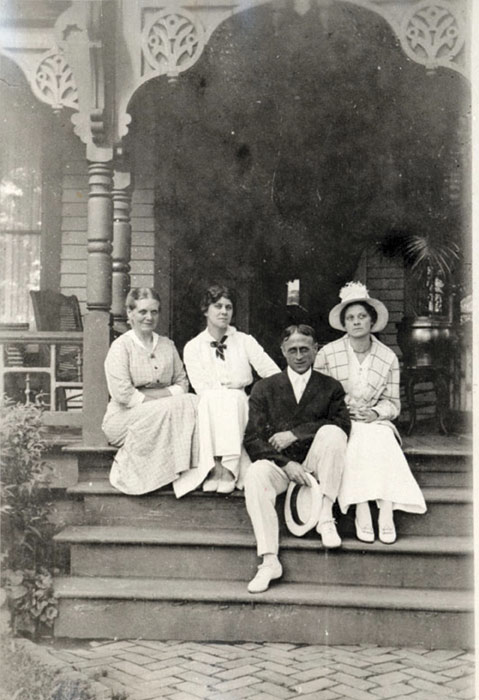 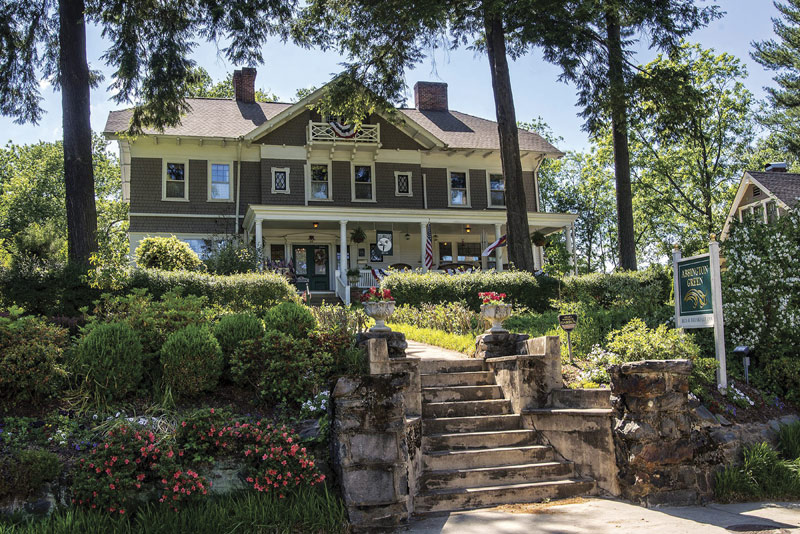 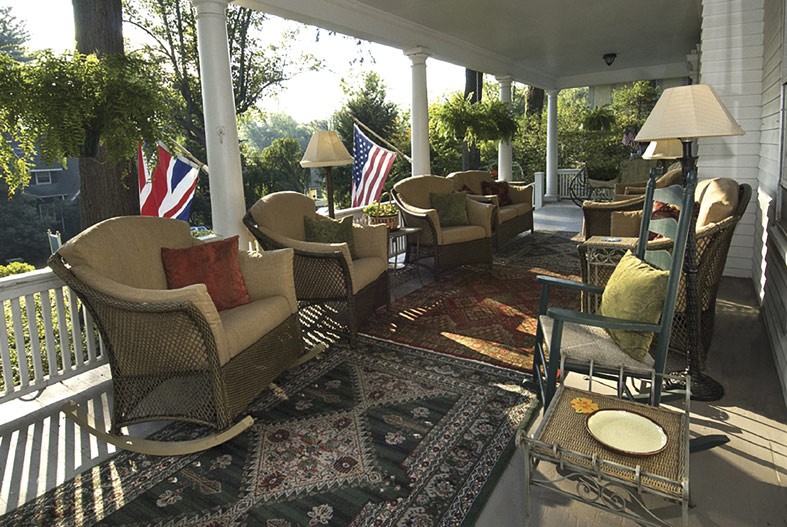 They use locally sourced, natural and sustainable products when possible and make their own pastries, biscuits, bagels and breads daily. Chiesa, meaning church in Italian, is another Montford restaurant and an excellent example of preservation through repurposing.

With the slogan, Food for the Soul, the restaurant perfectly suits its home in a renovated church on the corner of Montford and Chestnut Avenues. Open for dinner only, the home-made pasta-centered dishes include subtle flavors that make even the most scrutinizing Italian food lover smile with delight. The original structure was built in 1906.

Nine Mile, located at 233 Montford Avenue, recently underwent a renovation project that includes an expanded bar area. The restaurant offers dishes inspired by the chef’s love of Jamaica. Built in 1927, this brick and stone building served as a restaurant prior to Nine Mile taking it over in 2008.

Historic Montford is home to numerous Bed & Breakfasts that are perfect examples of the beautiful architecture that can be found here.

This Colonial Revival was built in 1909 for the David Latourette Jackson family and is distinctive in its design as Mrs Jackson desired a home conducive to entertaining. Consequently, the Parlor, now used as a Spa for guests, was larger than typical for that period. The Foyer was also larger and included a double-wide entrance onto the dining room.

With seven bedrooms on the second floor and a 2000 square foot ballroom on the third, the home was substantial in size and served the purpose of a residence that was filled with family, friends and guests. In other words, a perfect house to be converted to a B&B. The Abbington Green B&B opened in 1993 following renovations.

In 1994, a complete set of floor plans signed by Smith was found at the Historic Archives at Asheville’s City Hall. These drawings were subsequently used to bring the house back to its original splendor when the current owners, Nick Poulos and Steve Donahue purchased the property in 2014.

The property includes a beautiful veranda upon which the guests enjoy afternoon refreshments and a view of the beautiful Blue Ridge Mountains.

Another distinctive feature of the Abbington Green B&B is its beautiful English gardens. A century ago in the English County of Surrey, the garden designer and artist Gertrude Jekyll set the style of what today is considered the “quintessential English garden.”

By massing plants by color in what’s is known as “drifts” and grouping plants by size, texture and height, a repeated pattern emerges that is characteristic of Jekyll’s garden designs. Donahue is responsible for the grounds and the gardens and uses no chemicals nor pesticides in the maintenance. The focus is on native plants to support wildlife and pollinators. In 2015, the gardens became a Certified Wildlife Habitat.

Seven gardens surround the house and are considered “authentic English Garden Rooms” each with a different theme. The gardens add to the relaxing and peaceful atmosphere of the B&B and provide a respite for guests.

Walking through the “rooms” from the front of the property to the back, you’ll find the Shade Garden, followed by the Chartreuse Garden with its yellow and white flowers. The Vegetable Garden provides fresh homegrown produce used by Poulos in breakfasts and the afternoon social offerings. The White Rose Garden is next with its tiered fountain in the center, followed by Mom’s Rose Garden, planted in honor of Poulos’s mom.

The Oriental Garden is influenced by the centuries old British fondness for Chinese and Japanese art. The Lower Garden is based on Jekyll’s design using a combination of repeated patterns of mass and grouped plantings of single varieties. An antique gazebo that Poulos found at a local antique store has been restored and stands in the center.

The house known as Abbington Green B&B Inn and Spa at 46 Cumberland Circle is on the National Register of Historic Places.

One of the more famous buildings in Montford is Highland Hall, a Colonial Revival building built in 1909 for Highland Hospital, founded by Dr. Robert S. Carroll, a distinguished psychiatrist. The hospital was donated to Duke University’s Neuropsychiatric Department in 1939. A deadly fire in 1948 took the lives of nine women, including Zelda Fitzgerald, wife of F. Scott Fitzgerald.

On the campus of Highland Hospital is Homewood, one of the buildings in Montford that resembles a castle. Located at 19 Zillicoa Street, it was Dr. Carroll’s residence. His wife, Grace, a world-renowned concert pianist, taught piano lessons at Homewood and among her students was jazz musician Nina Simone. Today Homewood is used primarily as an event venue.

Located in a cottage on the grounds of Homewood is Unity Healing Arts, providing therapeutic massage with a focus on therapy, injury rehabilitation and pain relief.

Riverside Cemetery is also on the National Register of Historic Places and comprises 87 acres of rolling hills and gardens. Established in 1885, the cemetery overlooks the French Broad River.

Whether you’re taking a tour of the beautiful architectural homes in this district, enjoying a meal at one of its fine restaurants, or relaxing with a rejuvenating massage, there’s always plenty to do in Historic Montford.

The Montford Center: Featuring the Montford Climbing Wall and a gymnasium, the center also comprises the Montford Complex with a playground, tennis court, lighted ball field and the Hazel B. Robinson Amphitheater.

History at Hand: Guided history and architecture walking tours of Montford and Riverside Cemetery. Call 828-777-1014 for schedules and reservations. Whether you live, work or play in Historic Montford, we are all stewards, and as such, we need to continue to value our past, while participating in a future that supports continued growth and safeguards the beauty and charm that makes Asheville what it is … a city full of energy, creativity and respect for its history.

If you’re interested in additional information about William Henry Lord or Richard Sharp Smith, the North Carolina Room at the Pack Memorial Library has a substantial collection of records for both, including more than 3000 drawings and plans for Montford homes and other Asheville properties.

Taylor’d with Style: Sewing Your Style

The Bright Side of Gray Divorce